Aimed primarily at guitarists who need audio interfacing and a keyboard, the KB37 seems to have a lot to offer for the price. We find out how it measures up. 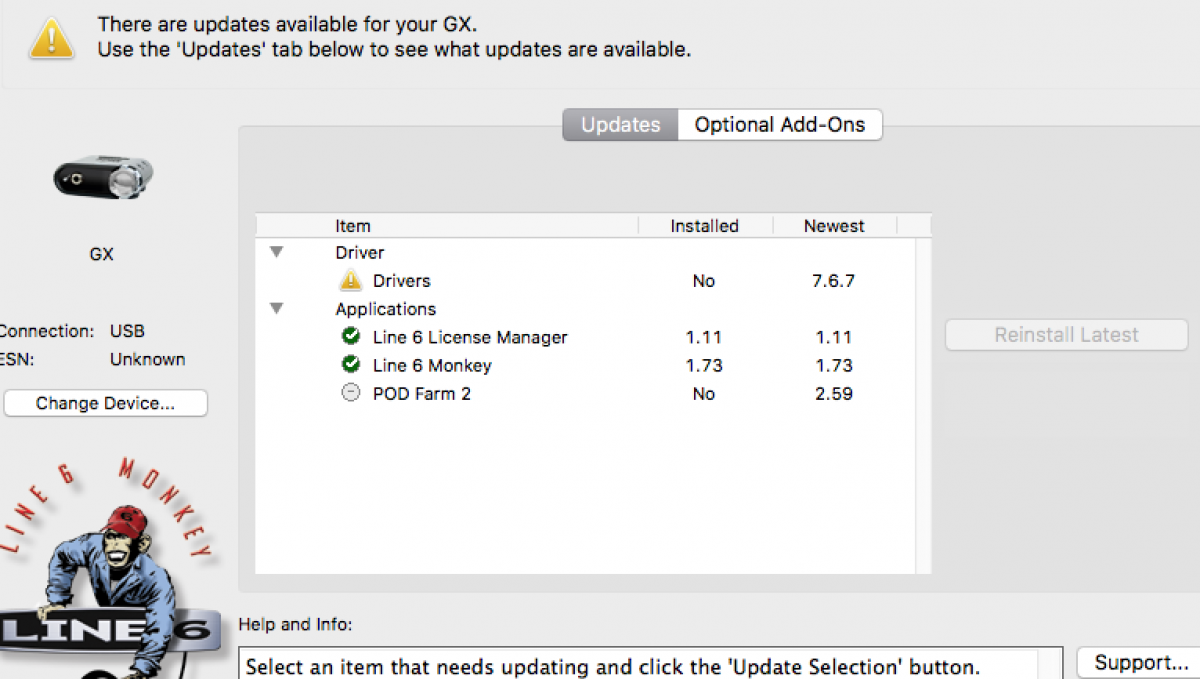 While Line 6 started out as a company catering predominantly for guitarists, products such as the Toneport suggest that they are taking the computer-recording market very seriously, and the inclusion of Pod-style software amp-modelling makes it clear that they intend to make computer recording more attractive to the guitar player.

That being the case, you may wonder why they have produced what, at first sight, looks like a controller keyboard. A closer look reveals that although the 37-note, velocity-sensitive keyboard, which has both pitch-bend and modulation wheels, provides the main visual focus for the unit, there is really a lot more to it than that. In fact, the Toneport KB37 includes a fully functional, two-channel Toneport computer audio interface (24-bit at 44.1 or 48kHz), complete with two mic amps capable of phantom-powering capacitor microphones. (You can use the device to work on projects being recorded at 96kHz, though, a feat made possible by sample-rate conversion at the driver level, which avoids USB bandwidth bottlenecks and allows simultaneous I/O at 96kHz.) There are also transport controls and four assignable real-time knobs and buttons for controlling key parameters of your PC or Mac software. All this connects to the computer via a conventional USB cable and all the necessary power is drawn from your computer's USB bus.

Even guitar players need a keyboard for inputting MIDI data on occasions, if only for bashing in drum parts, so the KB37 is far more guitarist orientated than it might at first appear. As with the stand-alone Toneports, you get the Gearbox amp-modelling software, offering not only 16 amp models taken from the Pod XT but also a range of pedal effects, bass-amp modelling from the Bass Pod XT and even emulations of classic vocal-recording preamps. This software doesn't function as a plug-in; rather, you record through it. All the emulations benefit from Line 6's Direct Tone Monitoring, enabling you to record and monitor via the amp models and effects without hearing any latency, even where the host software requires large buffer sizes. This is achieved by doing the necessary processing before the audio encounters the drivers for the main DAW software, so the experience of recording is very similar to playing through a piece of hardware, with on-screen controls. For me, the direct-monitoring aspect of this package is a big deal, because even small amounts of monitoring delay while recording can adversely affect the performance of a guitarist or singer.

You don't even need to worry about expensive recording software, because the Toneport KB37 comes with its own copy of Ableton Live 5 Lite, though Mac users can also use the Garage Band software that comes with all new Macs, if they prefer. Add a microphone plus a pair of headphones and the Toneport KB37 really is all you need to turn your computer into a fully functional recording system.

Constructionally, the Toneport KB37 employs a tough plastic shell construction with all the controls on the top surface and all the connectors on the rear. Taking the connectors first, there's a stereo headphone output with a level control on the front panel, and this is separate to the main output-level control. The main stereo analogue outputs are on quarter-inch jacks and would normally feed your studio monitor amp or active monitors. There's also a 'monitor in' stereo jack for adding external sources to the monitor mix, as well as a pair of line inputs for recording from electronic keyboards or external preamps that have line-level outputs. A single separate high-impedance jack is available for guitar or bass recording, though you could also record via the line inputs using a high input-impedance DI box.

A slide switch brings in a pad to attenuate particularly hot mic-input sources, and next to this is the slide switch that puts 48V phantom power on the two balanced XLR mic inputs. A standard USB socket connects to the computer via the included USB cable, while an S/PDIF socket provides a digital output for feeding digital monitors or for recording to a hardware digital recorder. Whatever you're recording through, the Toneport always appears both at the analogue line outs and the digital S/PDIF coaxial socket on the back of the unit. Three further jacks allow for the connection of two external footswitches and an expression pedal for controlling such things as volume or wah-wah. The pedals may also be assigned for stopping and starting recording or bypassing effects and so on, if you have your hands full of guitar.

All the necessary software, including Gearbox and drivers, comes on an an install CD-ROM, with a second disc for Live 5 Lite.

The main control panel is logically set out with pitch and mod wheels to the left, just above the Octave Select buttons. These allow the keyboard's MIDI output to be moved up or down by three octaves: six LEDs show what octave range the keyboard currently covers. MIDI data is sent over USB along with audio data and may be used to play software synths or to tap sampled drum patterns into your host DAW software. The KB37's keyboard itself has a decent action. Having three octaves is much more useful than two, and still ensures that the unit is small enough to be portable.

Photo: Mike CameronIn the centre of the keyboard are four knobs and four buttons that may be assigned to control such things as software plug-in parameters. Their default values (GM controllers for synth envelope settings and effects depth) are shown in the Gearbox 'soft' manual, along with simple directions for reassigning them to other values by selecting the Hardware tab, then the MIDI tab. This brings you to a page listing all the alternative MIDI controllers that can be assigned, and once you've done this you can save your new mapping setup as a preset. There are also two arrow buttons for 'sound select' up and down. Using the KB37 would perhaps have been a little easier if there had been some form of panel display and selector buttons to access mapping presets from the hardware, rather than having to go via the Gearbox software, but such a low price point has to be met somehow. 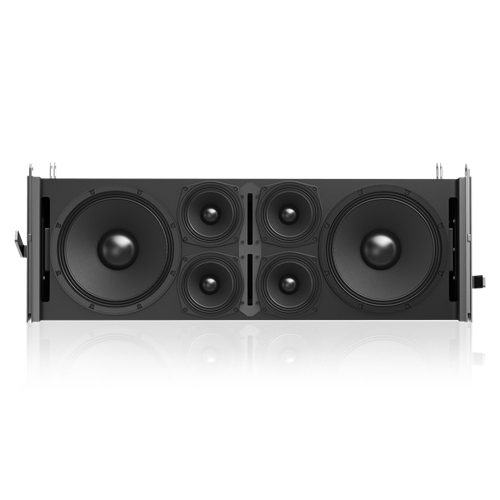 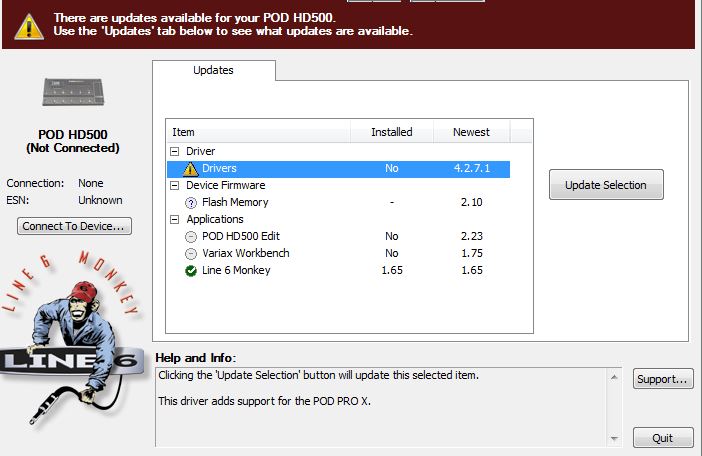 Moving to the right, there are all the controls associated with the stand-alone Toneport UX2 interface, plus chunky transport buttons. These dedicated transport controls are set up by default to send standard MIDI Machine Control (MMC) commands. Separate gain controls are provided for the two mic inputs, while retro 'frog-eye' moving-coil meters display the level, though you might get a more accurate reading using the meters in your DAW software. However, there is a separate fast-acting clip LED next to each meter to warn you if you are hitting the end stops, so you can back off the input gain, and there's also a status LED to remind you that the phantom power is switched on. Other than the output and phones level controls, that's all there is to it, so this isn't a complicated unit by any means. In fact, the most complicated thing about it is the Gearbox software, and that really isn't complicated at all.

We've covered the Gearbox software in SOS before — in March 2007 and back in the February 2006 issue — so I won't waste time covering too much old ground here.

As touched upon earlier, Gearbox doesn't provide modelling effects as plug-ins. (There is a new product that offers this facility, in the form of Gearbox Plug-in, reviewed in March 2007, which comes with its own simple I/O hardware.) Instead, the Gearbox amp and effect models operate directly on the input source, so you can only use one (or two if you record using both channels) at a time and the result is recorded just as it would be if you plugged a Pod XT into the input of your system. This approach may seem less flexible than a plug-in, where you can run several at the same time and change the sound after recording, but there is the benefit of no monitoring delay or latency to worry about. It also keeps operation very simple — something that guitar players value. Even if you're not a guitar player, however, the included stomp effects and vocal preamp modelling are definite bonuses, and even the amp models come in handy for warming up digital synth sounds. 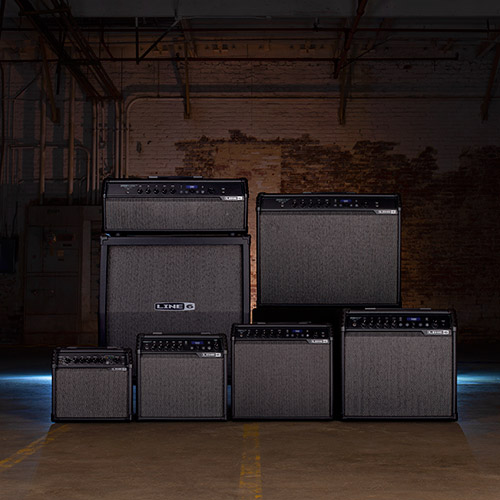 I was very impressed by the original Toneport range and this keyboard version seems to make a lot of sense, especially for laptop-using guitarists who want a one-box solution that will also allow them to play in some basic keyboard parts. Having a handful of assignable controls is also useful for controlling plug-ins or soft synths, but for me the transport controls are the most useful, as they feel much more intuitive than using a mouse or having to remember key commands.

As stated earlier, the near zero-latency monitoring is really significant, and the included software produces genuine Pod XT-style quality with a very straightforward user interface. I have no problem with the audio interface or mic preamp quality, which is really rather good for such a low-cost unit, and the bundled Live 5 Lite software is a great place to start, as it has applications both in the studio and for live performance. Guitarists should love the KB37, but it has so much to offer that keyboard players might want to take a closer look too.

There are more sophisticated keyboard controllers around, but they tend to cost rather more. As a cost-effective 'do everything' box, the KB37 comes as close to ideal as you can reasonably expect, and the amp modelling makes it particularly appealing to guitar players.